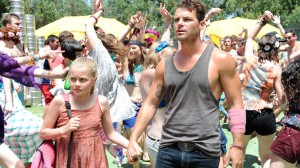 Synopsis:
A self-obsessed young man makes his way to the party-to-end-all-parties on the last day on Earth, but ends up saving the life of a little girl searching for her father. Their relationship ultimately leads him on the path to redemption.

There are only a handful of things that scare me and the end of the world is one of them. So knowing that this was the subject at the centre of Zak Hilditch’s dramatic thriller it would be a lie if I didn’t tell you that my hands were sweating before I sat down to watch it.

From the beginning of the film it is known by everybody on the planet that the world is coming to an end and everybody is planning their last moments on earth. For James, he is terrified and sets out to make the most of what he has left. On his journey he rescues a young girl and takes responsibility for her setting him off on a chain of events proving that it is never too late to change your ways.

Focusing on his characters and relationships instead of the impending apocalypse, Zak Hilditch has delivered an end of the world scenario that feels entirely real. Lacking any over the top blockbuster style effects he opts for a muted approach to the subgenre which makes a refreshing change. Sure, it is a little rough around the edges but the emotional impact of the story is there and it is through character interactions and strong performances from the cast that this is achieved. Speaking of which, the cast are fantastic.

Wolf Creek’s Nathan Phillips plays James. His character is weak at the beginning of the film and will do anything to run away from any degree of responsibility, even leave his girlfriend alone in this desperate time. What I liked is how through interactions with other characters James slowly develops into a much stronger individual thanks in most part to a young girl called Rose. Phillips delivers a solid performance and does a fantastic job at leading the film.

The true star of the film is Angourie Rice. As Rose she is fantastic and wholly believable.  Her character is so endearing and Rice shows great skill in doing this and does so beautifully. As the catalyst to the lead character’s change of heart, Rice shares the screen with Philips but it is great to see that she holds her own and handles her scenes with poise which, at such a young age, is incredibly admirable.

Despite the relatively short running time of 87 minutes, These Final Hours does unfortunately drag towards the middle of the film which really slows the film to snail pace. However, I wasn’t disappointed in the slow-burn approach as the film is rescued by the performances of the cast and the wonderful cinematography from Bonnie Elliott. Ultimately, I enjoyed These Final Hours. Hilditch has done a wonderful job in offering an apocalyptic thriller with something of substance that will stand the test of time.