THERE’S SOMETHING TERRIBLY WRONG WITH MY SON

This story has quite an interesting background. It was discovered on the /NoSleep section on Reddit and became a viral Creepypasta success. Now an expanded version of Christopher Maxim’s short story is available as an ebook.

We meet a single father whose infant son is exhibiting some strange behavior. The four month old never cries or shows emotion and he doesn’t even seem to sleep. The father brings his son to the doctor’s office but is told all is well. The man finds no peace with what he’s been told and continues to question and monitor his son’s behaviour. 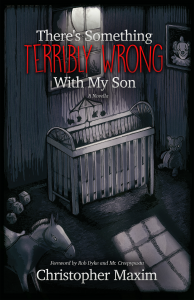 There is a strong sense of dread throughout the story and we really can’t be sure of what is happening. The son’s behaviour with the father is very creepy and alarming. The father has no support group and is not sure who he can trust or who has their best interests in mind. The disconnect between a four month old and his only parent and the apparent mistrust within the family is disconcerting from the beginning.

The story takes some very unexpected turns and I can guarantee it does not head where you would expect. I can’t say much more for the sake of spoilers, but what we have is a tense, creepy story with a touch of Black Mirror. There is something terribly wrong with his son. To find out what you’ll just have to read it.