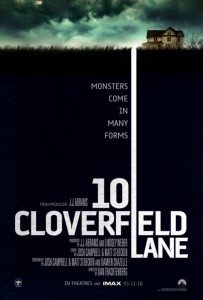 In a little over a month we’ll be getting the surprising sequel to Cloverfield that we all forgot that we needed; 10 Cloverfield Lane. We have a new teaser trailer to share with you which aired during the weekend’s Superbowl and it’s a good’un.

It’s not quite as sinister as the first trailer we were given, because trying to squeeze that level of threat and menace is not going to happen in 30 seconds. Plus, it aired during the Superbowl, so it’s got to be all about the action!  And all about the action it is; fast-paced editing and an explosion gets us to the end of the trailer which features the most intriguing aspect yet: a mighty roar!

The air of mystery that surrounds the film overall is undeniable and this has fast become one of our most anticipated films of the year. It’s not often that we get a solid sequel to a monster hit, but 10 Cloverfield Lane looks to be an exciting and entirely different film from the first and that has got to be commended.

10 Cloverfield Lane will be released in the UK and USA on 11th March.