There’s More Cyber Horror in the Trailer for Ratter

This is not a film about killer rats – sadly – a Ratter is a type of hacker who stalks people online during their most intimate moments and that is what Ratter is about. We can’t say we’re not a tiny bit disappointed in its lack of rodent killers, but hey! 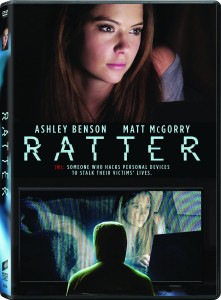 Ashley Benson stars as Emma, a graduate student living alone in New York City. She is being watched by a “Ratter” who stalks her by hacking into all of her personal technology–laptop, phone, and other web connected devices–to record her most intimate moments. Eventually the video feeds aren’t enough and the stalker moves from the virtual to the physical – with disturbing consequences.

You can watch the trailer below and check out how the film is a bit of a twist on 2015’s horror hit Unfriended. However, rather than being completely from the perspective of someone’s computer, it dabbles in the more traditional found-footage style of filming, too. It’s a bit easy on the scares and it’s clearly catering for the teenage viewing audience, but Unfriended was surprisingly good, so maybe this also will be.

Sony will be releasing Ratter on DVD on 1st March 2016, comes from first-time director Branden Kramer and is based on his short film Webcam.