There’s Global Swarming in the Poster for Sharknado 5

Another Sharknado is gearing up to unleash a whole new set of windy terror in Sharknado 5: Global Swarming and a new poster has been released to tease the upcoming potential worldwide devastation.

The poster shows the return of Ian Ziering’s Fin Shepard and Tara Reid’s April, who are on a mission to rescue their son. In this edition, the Sharknado heads across the world and that can only mean one thing: a whole set of international cameos! Let’s be honest; they are the best part of Sharknado. 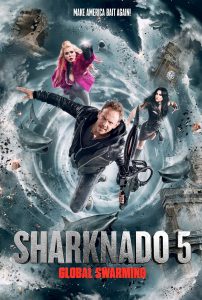 Synopsis:
The mission gets personal for Fin Shepard (Ziering) and his bionic wife, April (Reid), when their young son gets trapped in a travelling ‘nado and transported all over the world. From London to Rio, Tokyo, Rome and Amsterdam, the heroes seek assistance from royals, scholars, Olympians and news talking heads in their epic battle.

Anthony C. Ferrante returns to direct Sharknado 5, which will air on 6th August. Check out the poster below!