There’s an Evil Presence in the Trailer for Annabelle: Creation

We’re hoping that David F. Sandberg (Lights Out) can do what Mike Flanagan (Oculus, Hush) did to last year’s Ouija: Origin of Evil and restore our faith in a falsely started franchise. The new trailer for Annabelle: Creation has certainly taken a leaf out of Ouija: Origin of Evil’s book and gone back to the beginning of Annabelle’s crafted life. It looks all the better for it. 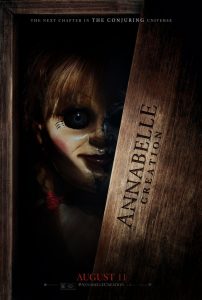 The trailer shows that Annabelle: Creation, as expected, is an origin tale. The story will follow a group of children and a nun who go to stay in an orphanage where a doll-maker has created a terrifying doll that he hoped to house his deceased daughter. As always, we’re reminded that contacting the dead is wrong even if you had the best of intentions at heart.

When speaking about his work on Annabelle: Creation, Sandberg said:
“James [Wan] set up this universe so great with the first Conjuring, which I was a huge fan of. “It has this sort of classic horror movie feel—more old school. So this was my chance to do my version of an old school horror movie.

This is a prequel; hence, the Creation title. We actually see her being made, which was really fun for me. I probably wouldn’t have been as interested in making it if it had been a straight continuation of the first movie.”

The trailer hosts a few impressive scares and like Insidious: Chapter 3, shows the torment of a key character with a physical injury. Insidious: Chapter 3 conjured some truly scary moments in its scenes that showed a poor girl physically incapable of running away from the entity stalking her in the night, so hopefully Annabelle: Creation will be able to do the same, but differently.

Check out the trailer below and be sure to pay a visit to Annabelle: Creation on 11th August 2017.