There’s Desert Thrills in the Trailer for The Jurassic Dead

Films like this are our guilty pleasure and we ain’t afraid to admit it! The trailer for The Jurassic Dead is kickass and shows what happens when a dinosaur bite turns people into zombies. Yep, a T-Rex that turns the alive into the undead.

The trailer looks like an epic videogame brought to life and is packed full of explosions, fights and action cheese. It’s also got a badass soundtrack to get you ready for the madness. Check it out below, we’re sure you won’t be disappointed. 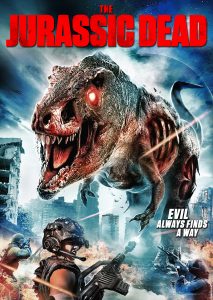 Synopsis:
A unit of mercenaries must team up with a group of tech-geek students after American is struck with an EMP attack. Deep in the desert, they find the source of the terror, a mad scientist who has also just created a living dead T-Rex dinosaur, one who turns everyone it attacks into a zombie. Now they must scramble to stay alive and save the planet from the ultimate undead predator.