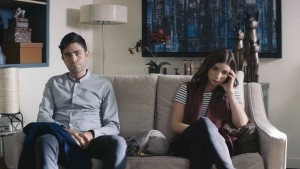 We love Richard Bates Jr. at SCREAM and can’t wait for Trash Fire to be released. The film recently premiered at Sundance film festival with a mostly positive reaction, cementing the director as a hit with cult audiences. His dark-comedy horror style prevents his films from being enjoyable per se, but there is definitely something to commend within his twisted and unique features.

You can take a look at a clip from his next horror-drama Trash Fire below, which shows a few home truths being aired at the dinner table. Were these people not raised to know that it’s rude to talk with your mouth full?

Synopsis:
When Owen is forced to confront the past he’s been running from his whole adult life, he and his girlfriend, Isabel, become entangled in a horrifying web of lies, deceit, and murder. You’ll laugh. You’ll cry. You’ll be scarred for life.

Keep your eyes peeled for a release date.