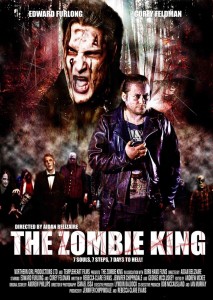 Synopsis:
Samuel Peters (Edward Furlong) is left distraught when he loses his wife and decides to mess with the Voodoo religion in the hope of bringing her back. He calls upon the dark god Kalfu who promises the return of his wife, in exchange for chaos being brought down on earth. The dead start to rise and an unlikely band of townsfolk must stick together if they are to make it through the zombie pandemonium.

The Zombie King starts promisingly and in a similar reign to zombie-comedy hit Shaun of the Dead, begins with a couple of nobodies who are thrown together during a zombie outbreak. Ed Wallace is a postman and a bit of a badass. He shows no fear when taking down the undead and opts for an old-fashioned punch to the face, rather than picking up a weapon like the other characters. Munch is the comedic milkman of the group and his weapon of choice is the milk bottle. His first on-screen kill is a little girl, showing that he’s not one to discriminate. Where Ed would rather have left the child zombie to her own devices, Munch decides to “nail that sh*t right in the face!” The next character is found up a tree; aptly named Boris the Bore, he’s a terrified parking warden who spends most of the film trying to avoid any type of heroic behaviour. I was a massive fan of this trio of misfits and believed I was in for some laugh-filled zombie action – hooray! However, when the film hit the 20-minute mark its genuinely witty opening was exchanged for forced, quite crude and dull humour.

Jane Foufas’ character Vera is particularly awful and is thrown in purely to offer some boorish dialogue. She strikes up an attraction to poor old Munch and says things like, I kid you not, “His stories are making me rather moist”. It’s completely cringe-worthy and wholly unnecessary, doing nothing but turning The Zombie King in to an embarrassment.

We’re now in a group of about 10 people and, except for our original 3, they’re as dull as dishwater and devoid of any ounce of personality. There’s talk of the army patrolling the area and shooting anyone, zombie or otherwise, without question. This is a poor attempt at suggesting the army are on-par with the terror of the walking dead; but, there’s absolutely no footage of the army throughout the whole film. They are an invisible enemy and pose very little threat, especially when compared to the relentless zombie hoard. By this point, the film is becoming a chore to continue with and the only flicker of entertainment is seeing some of these people meet their demise. Some interest is garnered in the origins of the zombie outbreak, but if you’ve read the plot of the film, you’ll pretty much get the gist. The flashbacks to Samuel Peters losing his wife are pointless, because they don’t add anything to what we already know. They are very repetitive and do little to encourage us that we’d do the same in his position. His dabbling in to Voodoo is random in itself as a drunken priest played by Jon Campling – who’s a bit of a laugh, until he becomes quite infuriating – tells us his actions were entirely out of character. Grief drives us to do crazy things I suppose, and it lead Samuel to unleash hell on earth. It all gets a bit confusing and the film starts to trip up on its own tale as it nears the end, but Corey Feldman makes a great voodoo God and it would have been great to see more of him.

All in all, The Zombie King is no Shaun of the Dead. It begins well and there are some great zombie-action sequences, but it slowly begins to deteriorate when it favours the quantity rather than the quality of its characters. The story fast becomes a confusing mess and by the time it ends, you’ll just be glad the whole thing’s over. Oh, and watch out for the post-credits scene, it might make you chuckle.