Synopsis:
A middle-aged man abducts a feral woman in the wilderness. He takes it upon himself to train and civilize her, even going so far as to involve his family. All the while attempting to keep up his façade as the loving patriarch of the typical American family. 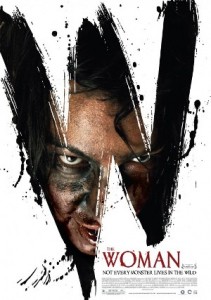 Before the end credits roll in Cannibal Holocaust, we’re given some introspection. This comes in a monologue of “I wonder who the real cannibals are.” This implies that the lines that separate savagery and civilization are not as boldly drawn as we think. Despite all of our technological advances, perhaps our primitive nature has never been fully tamed. Perhaps those who live in the wild are more civilized then we are.

Lucky McKee’s 2011 picture, The Woman, is the very definition of savagery. It’s a film based on the book of the same name by author Jack Ketchum. As it’s well known, Ketchum continues to spawn tales that are visceral, and dispel our preconceptions of Middle America. Much like The Girl Next Door, this is one that tears down the white picket fence of suburbia, to reveal something truly horrifying. 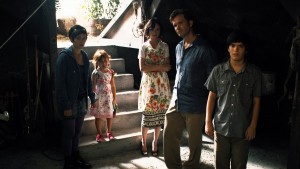 Our story follows a country lawyer, the pinnacle of respect of his community. Upon the surface, he seems to be living the quintessential American Dream. This includes the nice house, the wife, the children, and everything that comes with that illusion. However, it’s what lies beneath the surface of that outward projection that catches our interest early on. This typical family is anything but typical, as a matter of fact; they’re on the dysfunctional side of things. Much of this isn’t explained, but implied through their actions, and their interactions with one another. We’re shown a family that’s ruled by an abusive patriarchy, which seems to be getting passed on to the next of kin. As the viewing audience, we’re given a first hand account of what goes on behind closed doors. A large part of the horror you’ll find in this one is confined to a domestic setting, one that could easily be happening in your neighborhood. Abuse and neglect are horrors that exist in our everyday life. This film does an incredible job at driving them home, and makes them seem all too real.

Aside from the family, the other part of our story surrounds our title character. While on a hunting trip, the husband captures a feral woman, living alone in the wilderness. He brings her home with the intent on domesticating her, much like one would do to an animal. There’s not a moment that goes by that she isn’t treated as such. This further presses the point upon us of the dominancy of the patriarchal household. Seeing her helpless and chained in alone in basement gives us a feeling of empathy. It also makes us realize what’s in the wild should remain there. Here, it’s the family who are the brutes, not her. There’s also an angle of indoctrination, with the father involving his family members in her ‘rehabilitation.’ In some ways she becomes a martyr-like figure, suffering at the hands of another with a deeper purpose at hand. 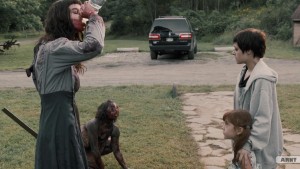 Both of these plots are given equal footing; this certainly helps build a contrast of the two worlds clashing with one another. More and more throughout the narrative, we’re shown the true face of savagery.

This is a film you won’t soon forget, and you may not want to. This will certainly leave a lasting impression, and give you second thoughts about your next-door neighbors. This is horror brought to the forefront of suburbia, and a work that reminds us that we’re not as civilized as we may think.