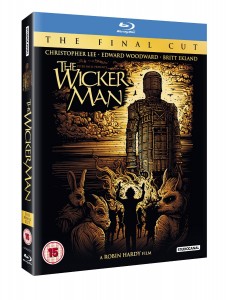 Synopsis:
When the highly religious and chaste Sargent Howie is summoned to the mysterious Summerisle to investigate the disappearance of a young girl, he finds the inhabitants there have little time for Christianity, and no recollection of the missing child…

Often referred to as “The Citizen Kane of horror”, The Wicker Man is often praised as one of the best horror films ever made. Despite its relatively quiet run at the box office upon release in 1973 it has now achieved cult status, with star Christopher Lee stating that Lord Summerisle is one of his greatest roles (which is fairly impressive for someone with 281 screen acting credits).  It also seems to be battling it out with Blade Runner for most re-released film ever, considering how many different cuts of the film have been released.  We will probably never see the full version of The Wicker Man as the original negatives of the original full length version are now lost, believed by some to have been used as landfill for the M3 motorway, which, if true, is a most inglorious end for such a unique and startling film.

The edition I am going to review today is the latest DVD release – The 40th Anniversary Final Cut, which includes The Final Cut (a newly restored version never seen in cinemas), The Theatrical Cut and The Director’s Cut, as well as all sorts of other bonus material, although I am going to review the film as a general whole, as opposed to giving each version its own review.

Because it doesn’t really matter which version of The Wicker Man you watch. The film’s strength’s aren’t in extra scenes of Sargent Howie on the Mainland, or chatting about apples, or snails shagging. It’s in the strange cobbled streets of Summersisle, it’s in the locals who are all just too damn chirpy considering one of their own is missing, it’s in the fantastic musical score, folk music which is both beautiful and sinister at the same time, it’s in the amazing performance of Edward Woodward, who makes who might otherwise have been an unbearable character sympathetic and a man to root for, it’s in Christopher Lee’s enigmatic Lord Summerisle, a man who oozes charisma with a hint of menace, it’s in Anthony Shaffer’s incredibly well written script and in Robin Hardy’s tight direction. Mark Gatiss, in his fantastic ‘History of Horror’ television series, described in as belonging to a sub-genre he called ‘folk horror’, a description I find very apt.

In case anyone is any doubt, I adore this film. It isn’t just one of my favourite horror films, it’s one of my favourite films, period, and I find the fact that on its initial release it was tacked on after Don’t Look Now as a second feature unfathomable. Despite its almost utter lack of violence and bloodletting it is a very atmospheric, disconcerting and yes, scary film. What Straw Dogs did for sleepy Cornish fishing villages, The Wicker Man did for the many isolated Scottish islands, which in the early 1970s, were probably very eerie places for outsiders to visit. As Sargent Howie pounds the streets of Summersisle searching for clues and meeting resistance at every turn, it is impossible to ignore the nagging feeling of doubt that the islanders know much more than they are letting on. Like the unlucky policeman, the viewers are on the back-foot from the second he arrives on the island, but we’re not entirely sure why. We just know something isn’t right. This is a feeling that doesn’t let up until the infamous climax of the film. “Come. It is time to keep your appointment with The Wicker Man” has to be one of the most chilling lines in cinema. Even long after one’s first viewing, it is with a desperate amount of tension and disbelief, and in an almost voyeuristic manner that the viewer watches Howie being dragged to his terrible fate; the fool who is king for a day.

The cast is uniformly excellent. As mentioned Christopher Lee and Edward Woodward put in stellar performances and make a very good combative team, with the pious Howie so aghast at the Pagan ‘abominations’ he finds abounding in Summersisle. They are ably supported by such genre favourites as Britt Ekland as the seductive Willow and a sadly underused Ingrid Pitt as The Librarian. Lindsay Kemp, playing the local landlord, walks the line admirably between jovial and sinister. The music, as mentioned, is a massive part of the film, and sounds like innocent enough folk music when listened to independently from the film. Within the film, it provides a much more malevolent context, adding tremendously to the unsettling atmosphere and is a big reason why the film is so memorable in my opinion.

As well as three cuts of the film, the 40th Anniversary Edition also has some other treasures on offer; Interviews with Robin Hardy and Christopher Lee, a music featurette and full soundtrack to the film, plus a documentary written by Mark Kermode and a featurette where famous fan discuss their love for the film, among others. This is a lovingly put together special edition of a great film, and a must have for fans.

I could bleat on about The Wicker Man until the cows come home, and I find it hard to believe there are many fans of horror who haven’t already avidly watched it many times. But if there are folk out there who haven’t seen it, I would say hunt it out as soon as possible. And for the rest of you, maybe a re-watch is in order?