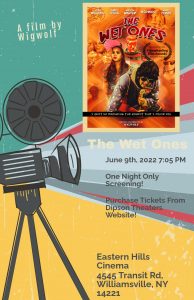 Underground film, The Wet Ones, is set to make its big-screen debut at the Eastern Hills Malls Cinema on June 9th. Tickets can be purchased online today!

The Wet Ones is an underground film that’s been garnering a host of positive reviews since its release in 2021. On June 9th at 7:05 PM, it will make its long-awaited big-screen debut at the Eastern Hills Malls Cinema in Buffalo.

The brainchild of talented musician/filmmaker Wigwolf, it’s a psychedelic action thriller that takes you on a journey that can only be described as manic. This is no surprise coming from a movie with the tagline “made by maniacs, for maniacs.” It features intertwining stories from the main cast, with a whole lot of arguing, profanity – and plenty of brutal action. The Wet Ones is an experimental dark comedy with a smattering of crime that really pushes the boundaries. Crazy dolls are a key feature of the film, with some famous names represented. The opening sequence sees a Kate Middleton doll partying away before getting stabbed in the woods by an Emma Bunton doll. Yes, it really is as crazy as it seems.

But therein lies the beauty of the film. Like all underground cinematic pieces, it moves away from the conventions and norms of modern cinema. You aren’t watching this to see a film that will carry away numerous awards at The Oscars. It isn’t here to please the Hollywood elites or the boring film critics in their cheap suits. No, this is a creative experience from a talented filmmaker that will make you laugh, jump, exclaim, turn away in horror, and yearn for more.

Tickets for the premiere are currently on sale and can be bought here. Wigwolf will be attending the big-screen debut in person, bringing a whole host of behind-the-scenes insights to add to the movie experience.