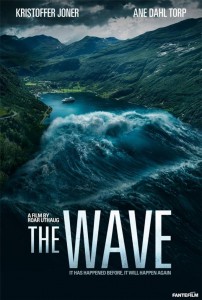 Synopsis:
Even though awaited, no one is really ready when the mountain pass of Åkneset above the scenic narrow Norwegian fjord Geiranger, collapses and creates an 85-meter-high violent tsunami. A geologist is one of those caught in the middle of it.

The Wave came crashing down upon unsuspecting audiences at this years FrightFest in Glasgow leaving everyone in a state of breathlessness. Expertly directed by Roar Uthaug, the story focuses upon the inhabitants of Geiranger, who are nestled amongst the most beautiful fjord.

Although seemingly residing in paradise, there is a real sleeping danger that the locals face on a daily basis. If it wakes, it will destroy everything in its path in the space of 10 minutes.

Writers John Kare Raake and Harald Rosenlow-Egg take us on an emotional journey starting with leading man Kristian (Kristoffer Joner). Working as a geologist at a centre that monitors the mountain’s movement, Kristian is due to leave his job with family to embark on a new life in the city. His eldest Sondre (Jonas Hoff Oftebro) is reluctant to leave, where as his wife Idun (Ane Dahl Torp) and youngest child Julia (Edith Haaenrud Sande) are slightly more optimistic.

Kristian has a deep love for the mountains and his work and by having such an affinity he was able to detect the small changes that would have devastating consequences. As in all good disaster movies, his colleagues did not listen or believe his concern, until that time when the mountain broke and it was just too late.

When the alarm sounds everyone begins to panic and Kristian has to begin the arduous task of getting back to his family before everything is wiped out from the full force of the Tsunami.

When the mountain fell, it pulled really hard on the heartstrings because of the connection between viewer and on screen characters. There was such a sense of warmth from everyone that you really do care and feel for the characters. Kristian is such a soulful man with a deep regard for all and he really is put through his paces trying to rescue his family. It is somewhat difficult to watch because there is a very real possibility that this will happen. The crack in the Akenset rock is expanding little by little every year and one day, it is highly likely that it will fall apart into the Storfjord causing this giant wave to wipe out multiple people and homes.

It is terrifying to imagine that if a tsunami hits then it is virtually impossible to survive, you can’t out run it and if you are hot on your heels then you will be knocked out by large objects, crushed by panic stricken people or submerged into a watery grave.

There are some under water scenes that  make for some claustrophobic viewing. The technical side of filming and performing under water must have been extremely challenging. Scored by Magnus Beite and with the cinematography skills of John Christian Rosenlund, The Wave is one perfect dramatic movie in both vision and sound.

My only gripe would be that I felt slightly let down by the last five minutes due to its Hollywood style ending. I would have made other choices, which I think would leave the audience feeling a whole lot more traumatised.

The Wave is no doubt one epic display of great Norwegian filmmaking and will take you on an emotional rollercoaster of love, life and death.