The Walking Dead to Get a Theme Park Ride

To inject a bit of fun in to The Walking Dead – honestly, the show can be a bit of a difficult watch with death and depression waiting round every corner – the show is getting a theme park ride. Unveiled at the International Association of Amusement Parks and Attractions (IAAPA) convention recently was The Walking Dead: Battle for Survival. 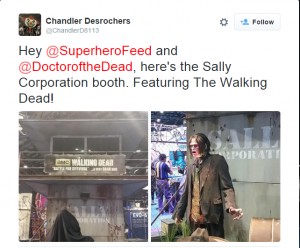 You can check out a short video of an impressive animatronic at the convention and a couple of pictures captured on Twitter. It has not been confirmed what the ride will entail, but if we look at what the company has previously created, we can assume it will probably involve interactive surroundings where guests will be armed with guns (fake) and have to shoot some zombies (hopefully fake, but who knows?).

As long as the ride doesn’t encourage you to not wash for weeks, eat a lot of tinned food and place you in a host of moral dilemmas, it could and should be a lot of fun.