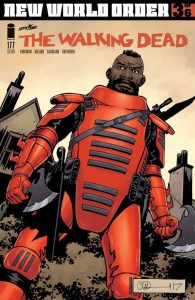 Filming is already underway for The Walking Dead’s eleventh and final season—and we’ve got some new casting news to report! Michael James Shaw has signed on to play the character of Mercer.

An officer of the Commonwealth and the de-facto leader of its military, Mercer first appeared in issue #177 of the Robert Kirkman comic series that spawned the long-running show. Prior to the zombie apocalypse, the character served as a marine.

As for the actor, Shaw is known to Marvel fans as Corvus Glaive, appearing in both Avengers: Infinity War and Avengers: Endgame. He also had recurring roles in the series Constantine and Limitless.

The Walking Dead’s expanded eleventh season will consist of 24 episodes, airing over two years. The season is slated to debut this summer.