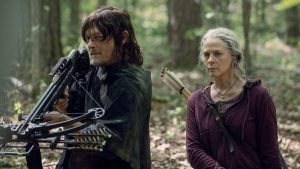 The end truly is nigh—at least, it is for The Walking Dead. The long-running zombie show will officially draw to a close with an expanded two-year eleventh season spanning 24 episodes.

With the previously announced six extra episodes from Season 10 that are scheduled to air early next year, that means we have 30 more episodes to enjoy before we bid farewell to the flagship series. The eleventh and final season will run through late 2022.

If you’re a fan of the series, you’ll be happy to hear that The Walking Dead universe continues to expand. A spin-off centring around Daryl Dixon (Norman Reedus) and Carol Peletier (Melissa McBride) has already been green-lit and will be run by Angela Kang, the current showrunner on The Walking Dead. That series is set to premiere in 2023.

AMC is also working with Scott M. Gimple, chief content officer of The Walking Dead universe, to develop a number of new projects grounded in this world. This includes a new episodic anthology, “Tales of the Walking Dead,” which will explore new or existing characters, backstories, or stand-alone experiences in individual episodes or episode arcs.

In the meantime, a brand new spin-off called The Walking Dead: World Beyond debuts on October 4th of this year, with the fifth season of Fear the Walking Dead premiering just one week later on October 11th. And as if that wasn’t enough, a feature film focusing on the character of Rick Grimes (Andrew Lincoln) is also in the works from Universal, Skybound, and AMC.