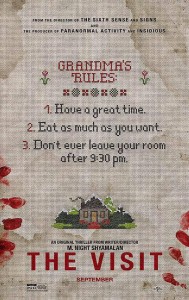 Synopsis:
A visit to the grandparents for the week does not go as expected by the two grandchildren.

M. Night Shyamalan: The director who took the world by storm with ‘The Sixth Sense’ is hardly a household name probably because no one is really sure how to pronounce it and in fairness most of his lead actors call him ‘Night’. King of the ‘Twist in the Tale’ with films like the, ‘Signs’ and ‘The Village’ and the excellent ‘Unbreakable’ – a consecutive string of big box office successes which came to a grinding halt with ‘The Lady in the Water’ which bombed like a fat kid jumping off the local swimming pools highest diving board and from there on the rot set in with a string of lamentable tosh including the laughably awful ‘The Happening’, and then big office flop ‘The Last Airbender’, a film based on a cartoon where kids bend air, water, fire and ice at will and memorable solely for one unintentionally funny line where one character tells another , ‘I always knew you were a bender!’ Cue much juvenile sniggering. His fate seemed sealed with summer blockbuster ‘After Earth’ a film which for the first time in his career deliberately did not feature the director’s name on the poster but instead led with its star Will Smith. Regardless the $130m blockbuster still received a critical mauling and did neither the star or director any favours.

In terms of budget the only place was down and he went back to what he was best known for – the twist in the tale. So here he returns with the extremely low budgeted ‘The Visit’ costing a meagre $5m and a neat little twist for a much needed return to form.

Audiences hearts might have plummeted when realising it was shot in the style of a home video but viewers need not fear because despite a few inevitably contrived moments this is a decent little film that audiences took to on its release last year that it ratcheted up almost $100m at the box office – not a bad return on the outlay made by Blumhouse productions got behind the film.

Brother and sister Becca and Tyler set off to stay with their grandparents for a week. They have never met them before (due to their own mother having stormed out on them when she was a student after a relationship with a college tutor which resulted in the birth of the 2 children). The Visit is recorded by Becca, an unlikely budding film maker directing her own home made documentary. She ropes in her brother Tyler, an irksome wannabe rapper who frankly would benefit from a clip round the ear, to assist in filming the proceedings. 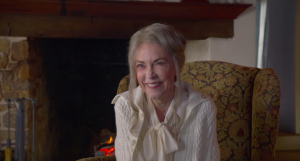 However a joyful week at grandma and granddad’s is not they get when having been told that bedtime is 9.30pm they creep out to see just what it is going on in the house. There are some flashes of the old Shyamalan brilliance with some decent sequences which show what he is capable of at his best but the film does start to lose momentum until ‘THE TWIST’ whereupon interest is reignited.

It’s not the greatest of the director’s films but it’s a decent return to his better works and just about maintains interest for its 94minute running time. The disc is a little light on extras but includes an alternate ending which is better than the theatrical one eventually used. It also has 10 deleted scenes which are obvious as to why they were deleted. Unfortunately, and with all his previous DVD releases, there is no director’s commentary yak-track which would be a much appreciated extra.