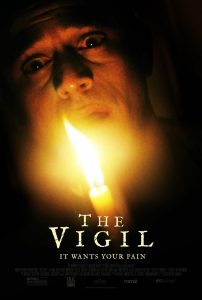 Synopsis:
Low on funds and having recently left his insular religious community, Yakov reluctantly accepts an offer from his former rabbi and confidante to take on the responsibility of an overnight “shomer,” fulfilling the Jewish practice of watching over the body of a deceased community member. Shortly after arriving at the recently departed’s dilapidated house to sit the vigil, Yakov begins to realize that something is very, very wrong…

Demonic horror movies are dime a dozen, but the vast majority seem to draw from Christian scripture to derive their scares. The Vigil sets itself apart from the crowd instantly by telling a story rooted in ancient Jewish demonology and lore, allowing it to deliver frights that feel remarkably fresh, despite dipping into the genre’s well-worn bag of tricks.

The feature debut of writer-director Keith Thomas, the film takes place over the course of a single night in Brooklyn’s Hasidic Borough Park neighbourhood. Yakov (Dave Davis) is adjusting to life beyond the insular Jewish community where he has clearly spent most of his life, still marvelling at the flashlight feature on his new phone and learning about customs like resumes through trial and error. But while most of the members of his support group seem optimistic, despite the struggles they’re facing, Yakov is burdened by some murky trauma from his past that gradually comes into focus as the film progresses. He might have left his community, but moving on is hard to do.

This is paralleled by the glimpses we get into the life of the late Mr Litvak (Ronald Cohen), whose body Yakov is tasked with watching over. Through cryptic messages from his widow (Lynn Cohen) and an eerie recording made by the deceased, we learn the true reason for the couple’s reclusive lifestyle—conveniently answering that age-old question in horror, “Why wouldn’t you just flee the house?”

Yakov’s interior struggle to leave the past behind is played out in flesh when he tries to do just that, resulting in one of the film’s scariest sequences. It’s also one of the few scenes that deliver anything particularly new when it comes to frights, though this is only a minor complaint. Thomas peppers in plenty of the usual suspects—nails breaking, lightbulbs flickering, callers acting odd—and underscores them with a soundtrack that will leave you adjusting your volume any time the music kicks in, but he does so in a way that still manages to frequently unsettle. This is helped by his excellent use of light and shadows, the latter of which have a nasty habit of moving. 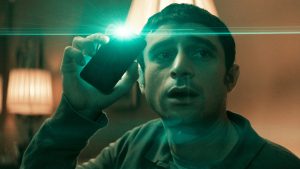 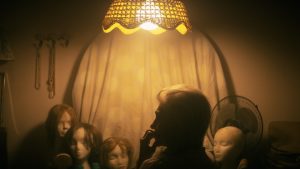 But what really sells the spook show is Davis’ haunting and haunted performance. The pain and vulnerability he brings to the role help to ground the film even as it digs deeper into supernatural territory, and while the conclusion somewhat detracts from Yakov’s personal journey by briefly shifting perspective, Davis’ sells it nonetheless.

The Vigil doesn’t reinvent the wheel, but it does offer a peek behind the curtain into a world that most viewers will be unfamiliar with. Many of its scares will feel familiar, but its uncanny ability to get under the skin may leave you inadvertently sitting a vigil of your own.