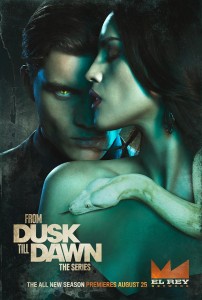 Robert Rodriguez’s cult classic zombie flick From Dusk Till Dawn received a television spin-off in 2014 and it successfully gave us a taste of an exciting, bloody universe. Centring on two bank robber brothers Seth and Richie Gecko, the story follows them as they attempt to travel across the border. Just like in the film, they encounter a family and use their RV to make their escape, but things get a bit crazy when they make a rest-stop at the Titty Twister. A whole kind of supernatural hell is soon unleashed, making for an extremely entertaining and sometimes scary ride.

Series 2 will expand the universe further and follow the Gecko brothers once again. However, this time, they begin their stories heading in different directions, but their paths are certain to cross. The new series will bring new faces, including Danny Trejo as The Regulator; an evil agent on a deadly mission and Briana Evigan as Sonja; a tattoo artist.

Check out the new trailer below, it offers a great look at what’s to come, without giving away too much. Series 2 will begin airing on August 25th 2015.