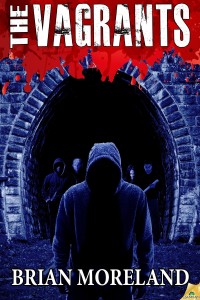 Journalist Daniel Finley goes undercover in Boston to study the lost and forsaken, the homeless and destitute hoping that he could inspire people to help get them off the streets. To become like them he entered a nightmare, one where he would forget his name every night and had to remind himself every day, who he really was.

During his sixth month of tented residence, a nomadic tribe of people arrived calling themselves ‘Seekers’, led by a self-proclaimed holy man named Mordecai, a carnival side show freak covered in tattoo’s culminating in a third eye on his forehead.

More and more people become enthralled by this messiah, losing themselves in his sermons and one tattoo later they’re part of his flock. The Seekers numbers grow and a coming apocalypse is threatened with the only thing standing in its way, a group of gangsters and a single journalist.

Vagrants is a supernatural thriller that even now weeks after finishing it I’m still undecided as to whether I liked it or not. Don’t get me wrong it’s well written and will appeal to most fans of the genre but for me nothing really stood out as being ‘bang’ yeah enjoyed that bit. I would read more from this author but I think this one was nothing special, just to formulaic for me.