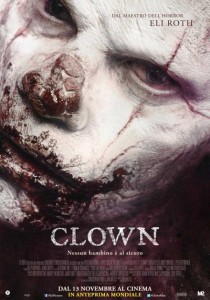 Originally released way back in 2014, the Eli Roth-produced Clown never quite made it to the States, despite getting a release in Italy in 2014 and the UK in 2015. Why? Who really knows? However, now all you Americans out there can breathe a sigh of relief, because Clown will finally be with you this year; hooray! It’ll be worth the wait, we promise.

Clown originally garnered attention after a fake trailer appeared online a few years ago that showed a man donning a clown costume and, unfortunately, not being able to take it off and becoming a terrifying clown himself. Eli Roth was so impressed by the fake trailer that he put the plan for a feature version in motion, keeping the trailer’s original directors Jon Watts and Christopher D. Ford on-board.

Synopsis:
It’s Jack’s 10th birthday, but the clown has cancelled. His dad, Kent, finds an old clown suit in the attic and saves the party. But after the party is over, Kent has a problem… the suit won’t come off. What starts as a joke quickly turns into a hellish nightmare. Kent can feel himself changing, and his desperate attempts to free himself just leave him in agonising pain.

As the suit takes hold of his body, Kent slowly endures a brutal transformation. As he changes, an uncontrollable hunger begins to consume him, an overwhelming and insatiable hunger for children.

Clown is equally as creepy as it is hideously funny and we loved it. In fact, we gave it the full 5 stars in our review last year, so have a read of that over here.

Catch Clown when it gets a limited theatrical run from 17th June 2016 in the USA.