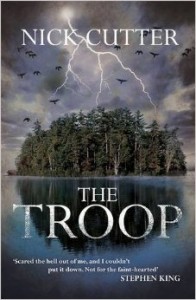 The Troop is a gripping mix of psychological and parasitic horror that will leave you wincing at some of the descriptions and rooting for some of the protagonists faced with overwhelming odds, my skins crawling just thinking back to those little fuckers at the guts of this story.

Five boy scouts and their scout master head of too Falstaff Island for a weekend of camping, sleeping in a cabin, earning their badges, the usual stuff but for the unplanned arrival of a boat and a man who is barely a skeleton, desperate for something to eat, suffering dementedly at the hands of something unthinkable.

This is all about what the fourteen year old stereotypical boys do when faced with an unseen disaster, how each of the different personalities respond to extremely disturbing circumstances and the realization that no one’s coming to rescue them.

Kent is the jock with a mouth to match his athletic ability and self-elected leader, Ephraim or Eff, is the short-tempered rebel, the only boy in their grade who smokes and he hangs out with close friend Max, who finds himself dragged along in his wake. Max has a remoteness that sets himself apart from the others, a cool self-control that will see him spring to the forefront when adversity slaps them in the face.

Newton is the overweight nerd with a superior intellect, who attracts the boy’s torments like a wasp homing in on your ice cream and Shelley is the loner, a budding sociopath who has an uncanny ability to open doors in people and manipulate them, he soon finds the perfect opportunity to realise his darkest dreams.

Events on the Island are entwined with news reports, evidence logs and sworn testimony from various sources, leaking information about the horror’s that the boy’s face from the viewpoint of the outside world.

My favourite part of the story was the character development of the two boys Shelley and Ephraim, Shelley shows all the makings of a serial killer in training, a psychotic individual who homes in on Ephraim, subtle at first, sowing seeds of doubt in the fellow scout’s mind, festering, playing with his temper and worming deeper, exploiting his psyche, his weaknesses.

‘He couldn’t get a grip on his sudden fear: it slipped through the safety bars of his mind and threaded—wormed—into the shadowy pockets where nightmares grew’.

The Troop is a disturbing read for sure, the horror elements are done exceptionally well, the pace is consuming and this is one read you won’t forget.