The Trailer for Iron Sky: The Coming Race is a Trip 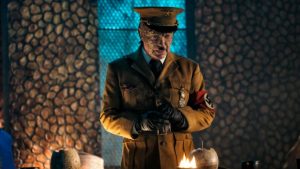 A brand new trailer has been unleashed for the upcoming sequel Iron Sky: The Coming Race and it’s even more mental than you expect. Probably. There’s dinosaurs, settlements on the moon, space fights and general mayhem.

The first Iron Sky was a lot of fun, but didn’t quite deliver the madness that came with it’s insane premise. This one, however, looks like it could do just that and more. Check out the trailer below.

Timo Vuorensola will be returning to direct Iron Sky: The Coming Race which is based on the story written by Jarmo Puskala. The film stars Lara Rossi, Vladimir Burlakov, Kit Dale, Tome Green, Julie Dietze and Udo Kier.

Iron Sky: The Coming Race will be unleashed upon the world when it makes its world premiere on 14th February 2018 in Finland. Hopefully it will make its way to the UK, USA and the rest of the world shortly after.