After the premiere episode of American Gods’ season two failed to live up to the promise of its first season, all eyes are on Good Omens to give us the Gaiman adaptation we deserve. And if the new trailer is anything to go by, we are in for a treat. 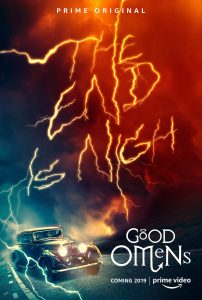 Based on the 1990 novel co-authored by Neil Gaiman and Terry Pratchett, Good Omens stars Michael Sheen (The Twilight Saga) as Aziraphale, a fussy angel who has an inexplicable yet ancient friendship with the demon Crowley, played by David Tennant (Doctor Who, Fright Night). With the end of the world on the horizon, the unlikely duo decide they’re too fond of their lifestyle to help Armageddon come to fruition. And since the Antichrist was accidentally raised by a nice family in a pleasant English village, things are not going according to Divine plan…

In addition to Tennant and Sheen, Good Omens has assembled a heavenly cast, including Jon Hamm (Black Mirror) as the Archangel Gabriel, Brian Cox (Manhunter) as Death, and Frances McDormand (Fargo) as God. The six-episode run was written by Gaiman, who also served as showrunner, and will launch on Amazon Prime Video on May 31st. British fans can catch it on BBC Two shortly after.

Part horror, part fantasy, part humorous drama, Good Omens looks all fun. The end is nigh, so be sure to prepare by watching the trailer below.