Synopsis:
Nearly seventy years after a vicious spate of unsolved killings that took place in the state-straddling town of Texarkana in the 1940s, the mysterious Phantom has appeared once more to terrorize its citizens. After her boyfriend becomes the first victim, Jami Lerner (Addison Timlin) begins to suspect that the 1976 film The Town that Dreaded Sundown may hold some relevance to the new wave of slaughter. She teams up with an old classmate to try and solve the mystery, but how many will die, and why did the Phantom leave her alive? 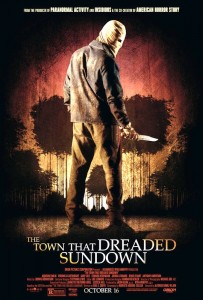 It has to be said that The Town that Dreaded Sundown is more than a little bit sneaky. Ostensibly part of the never-ending tide of classic horror remakes that have left discerning genre fans and critics howling Canute-like against the flood, director Alfonso Gomez-Rejon gets a partial reprieve for making a kind of meta-sequel rather than a straight retelling. Unfortunately it falls between two stools.

The original Town that Dreaded Sundown was a grimy little slasher by Charles B. Pierce that predated Halloween by a couple of years, and recounts the true-life slayings that took place in and around the town of Texarkana, which straddles Texas and Arkansas, between February and May 1946. This update is set in the same town, and in an intertextual twist, the earlier incarnation not only exists in the film, but is shown at a drive-in theatre in the town every Hallowe’en.

It’s an intriguing premise, and when the bodies start piling up at the hand of an apparent reincarnation of the original ‘phantom’, heroine Jami (Addison Timlin) begins to investigate the making of the original, in particular the recollections of Charles Pierce Jr. (an always welcome Denis O’Hare), who lives in a creepy shrine to his father’s achievement.

This allows Gomez-Rejon to indulge in some lacklustre moral inquisition into the original for its exploitative depiction of real-life events, while indulging in the exact same machinations. This new incarnation certainly doesn’t stint on the gore as heads are blown apart, luckless victims are slashed to gruey pulp, and bones burst through skin; so wagging an ethical finger at the original by having its existence act as a factor in the gory motivation of one’s antagonist doesn’t leave the filmmaker’s own hands exactly spotless.

Beyond the postmodern window dressing, The Town that Dreaded Sundown is another distinctly average addition to a genre bloated and obese with countless mediocrities. It hasn’t committed to the self-referential tone enough that is proves anything other than gimmicky, unlike Scream, or even My Name is Bruce, which have that technique woven inextricably into their DNA. Addison Timlin does her best but fails to elevate Jami from being just another unremarkable heroine, and several fine character actors like O’Hare and Gary Cole are wasted in little more than cameos.

The Town that Dreaded Sundown is entirely functional as piece of horror cinema, but it never lives up to the enticing and interesting premise. It’s certainly respectful of the original, and nods back to it on several occasions (a modified trombone from the original makes a reappearance in a bizarre, blackly comic moment) but there is otherwise little else to stir the blood. Perhaps in its favour is the fact that the original isn’t as revered as Halloween or A Nightmare on Elm Street, so it doesn’t feel anything like the butchering of sacred cows that those remakes were. That isn’t exactly a glowing recommendation however.