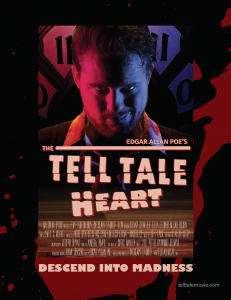 Tell-tale signs of outstanding cinematic talent right here! I don’t often choose to write a formal review of short films for which I receive screeners. Usually, I Tweet my thoughts on the film when I receive a request from an eager filmmaker who’s interested in what Professor Horror, as I’ve come to be known on #FilmTwitter, has to say about his or her motion picture endeavor. Writer-Director McClain Lindquist crafts a wholly original expression of the familiar macabre tale. While there have been many adaptations of Edgar Allan Poe’s The Tell-Tale Heart, this is arguably one of the best and freshest interpretations of the masterful storytelling of Poe. I appreciate this adaptation for its fresh take on a familiar story whilst delivering the visceral horror and intellectually-driven elements of the bizarre tale of murder. Every nuance of Poe’s short story is depicted with sheer reverence for the source material, while delivering an original expression of the timeless literary work.

Lindquist reimagines this story through the lens of a David Lynchian approach (with the color pallet of David Fincher), delivering vibes of Muholland Drive. While there are clearly some cracks in the veneer related to the time period in which this story takes place, these cracks are insignificant enough not to detract from the overall cinematic experience. Lindquist should have selected either a modern or gothic period in which to set his adaptation. Actor Sonny Grimsley (what a great last name for horror) not only brings the words of The Narrator to the screen, but he talks to the audience with such incredible sincerity that the utter madness of it all is visualized beautifully. One of the points I hammer in my screenwriting class is dramatize don’t tell. Dramatizing means more than showing the audience the story, it means finding the conflict in every beat of every scene. Fortunately for this adaptation, Grimsley brilliantly dramatizes every word spoken in such a manner that you will be completely enveloped in the twisted tale to which he beckons you to listen.Both the cinematography and stylistic editing are on point, and compliment the tone wonderfully. Although there are a number of standout moments from the film, I want to highlight how the duality of the narrator was expressed dramatically through the use of costuming and set design as well as a mirror. It would be all too easy for The Narrator to express his duality through verbal exposition (as this is taken from a short story), but the creative choice to couple the words of Poe with these striking images shows a strong knowledge of how to effectively go from page to screen. Often short films suffer from poorly executed technical elements, but I am pleased to report that all technical elements demonstrate an exemplary understanding of the art and science of cinematic storytelling. In addition to the technical elements is the haunting and unsettling score by Joel Pack. Lacking a true score is all too commonplace in many short films; not so with Lindquists’s The Tell-Tale Heart, Pack’s score is a character in and of itself. However, it never steals the scene, which allows the audience to become fully wrapped up in everything The Narrator says and does. I love seeing practical effects in all films, but especially horror. Thankfully, there are plenty of gruesome special makeup effects in this film for even the most insatiable appetite for gore, which never falling into the gratuitous category.

Lindquist certainly knows how to capture the madness in The Tell-Tale Heart. In many of Poe’s works, madness is often represented a lack of sufficient reasoning for committing murder or some other undesirable behavior. Lindquist illustrates The Narrator’s madness through the unreasonable rationale he uses to justify the murder of his roommate. Not only do we hear about the attempt at rationalization, it is dramatized for the screen. The only reason the narrator provides, in an attempt to justify the murder, is the simple fact that the roommate’s blind eye covered with a murky blue film bothers him a great deal–haunts him, even. He goes onto explain that he feels that he is being watched all the time. Being angered by the man’s eye is such a petty reason for the narrator to murder him, which proves that he is mentally unstable. Developing his plan for over a week, his madness is further represented through the meticulous premeditation of the method of murder. Furthermore, when The Narrator initially proposes that the “vulture eye” is his motive for murdering his roommate, he is not even fully certain that this was indeed his reason for committing the murder. And through the direction of Lindquist and the impeccable performance by Grimsley, we get into the mind of a madman in terrifying ways that are sure to induce nightmares.

Lindquist’s The Tell-Tale Heart is evidence of a future successful career as a horror filmmaker. I am eager to follow his filmography as he will hopefully use this short film as a springboard to write and direct original content, because we need more original storytellers in this sea of remakes and reboots.