The Strong Bond Between Horror and Metal

Over the years, it seems that the horror genre has enjoyed a strong bond with metal. It makes sense when you think about it. Metal’s subject matter is typically dark and evil, in line with its musical tones. Of course, the same can be said about horror films. The two fields also share a visceral attitude and grotesque imagery. Let’s examine how this dark relationship began and evolved. 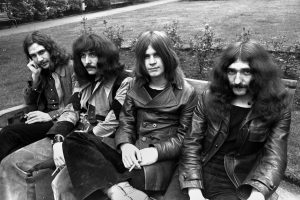 The 70s: A demonic dream
Black Sabbath is often considered the first metal band. Their early work also began the genre’s fascination with the horror aesthetic and atmosphere. Horror fan and bassist Geezer Butler was the man responsible after he claimed to have suffered a visit from a demon one night that inspired the band’s 1970 debut album, Black Sabbath. The record, which went on to sell one million copies in the U.S. alone, featured a title track that was regarded as the first-ever death metal song.

The 70s was a successful decade for horror and metal, with great work being produced in each field. The 80s introduced a more hardcore approach, with such bands as Venom, Motorhead, and Judas Priest taking the reins. With censorship controversy and extreme metal, along with slasher movies with gore effects taking horror to that next level, the relationship deepened.

The 80s and 90s: Alice meets Jason
In the 80s and 90s, album cover artwork was often interchangeable with poster artwork from horror movies as bands adopted similar gothic lyrical imagery to Hammer House. Acts such as W.A.S.P., King Diamond, and Alice Cooper threw horror props across the stage with reckless abandon. The next logical step saw rock stars begin to make appearances in horror flicks. Ozzy Osbourne and Gene Simmons were in the rock-themed horror Trick Or Treat (1986), Lemmy appeared in the bloody Tromeo and Juliet(1996), and Dee Snider acted in Strangeland (1998).

Alice Cooper sang the final song from Jason Lives: Friday The 13th Part VI (1986). The video for He’s Back (The Man Behind The Mask) combined clips of Cooper’s performance with scenes from the movie. A photoshoot even saw Cooper and Jason stand alongside one another. The single failed to chart in the U.S. but reached No.61 in the UK and No.4 in Sweden. Jason Lives made $19,472,057 domestically, according to Box Office Mojo. Cooper also had a small role in John Carpenter’s Prince Of Darkness(1987).

Moving forward: Slasher killers on stage
Slipknot looked like a band of slasher-movie killers as they marched into the millennial. There’s no shortage of newer bands like New Years Day and Motionless that are continuing the relationship between horror and metal, through either their artwork, lyrical content, or macabre make-up. Horror and metal became more accepted by mainstream audiences, thanks partly to relaxed censorship laws.

Cradle of Filth’s Dani Filth really made a name for himself in the movie business when he worked on soundtracks for such films as Resident Evil: Apocalypse (2004) and Dario Argento’s final instalment of the Three Mothers Trilogy, Mother Of Tears (2007), as well as appearing in the cult horror, Cradle Of Fear (2001) and the soon-to-be-released Baphomet (2018).

An uneven relationship
The relationship between horror and metal isn’t always an even one, however. Metal fans tend to be fans of horror, but it isn’t always true the other way around. Having said that, horror legend John Carpenter is a fan of metal as well as synth music and Kane Hodder would get into the mood to play Jason by listening to Enter Sandman (1991). Rob Zombie releases as many albums these days as he does movies. Zombie has released three albums that have each sold over one million copies: Hellbilly Deluxe: 13 Tales of Cadaverous Cavorting Inside the Spookshow International (1998), The Sinister Urge (2001), and Past, Present & Future (2003).

Now, the crossover between horror and metal has become normal and so is harder to find surprising. Jonathan Davis from Korn contributing to the soundtrack for Queen of the Damned (2002) was once deemed progressive, but now such pairings have become too frequent to make waves.

Beyond the movies
Doom metal band Candlemass released a horror soundtrack earlier this year entitled House of Doom. Rather than a contribution to a movie, however, the EP is a soundtrack to an online slot game. The full album will be available later this year. The popularity of themed slots is hardly surprising. Online casino Betway highlight that themed slots are increasingly prevalent, with film, music and even sport often catered for. It’s because of this that Candlemass saw an opening and took it, just as Ozzy Osbourne has done with his own licensed casino game.

And, in video games, metal and horror have made an even greater influence. Yes, we’re all aware of the recent surge in popularity of horror survival games but it definitely goes much beyond that. Brutal Legend starred Tenacious D’s Jack Black and his character was even based on Lemmy Kilmister, who also starred, and saw him battling a variety of creatures. And, even before that, Metallica’s mascot Eddie appeared in a Doom-style PC shooter, powering his way through level after level.

More than metal
It isn’t just metal that’s obsessed with horror, however. Psychobilly bands are known for their infatuation with the genre. Psychobilly features horror-inspired fashion and lyrics, along with its manic tempos and oldies flair. One particular band, The Creepshow, formed especially to write odes to horror films. Other bands in the genre include Demented Are Go and Mad Sins.

Death rock bands like The Plasmatics, GWAR and The Misfits also pay homage to the horror genre. In fact, the term death rock is often referred to interchangeably with horror punk. Purists would point out that death rock alludes to the LA scene while horror punk stems from NYC. Death rock (or horror punk) plays up to horror fans, especially those who enjoy songs about monsters, old horror films, zombies, and other glory tales. The Misfits are perhaps the most well-known band in the genre and certainly live up to the connection with horror through their zombie-like appearance. Musically speaking, however, metal remains horror’s greatest lover.