Synopsis:
In the dead of winter, a musician travels to a remote cottage to work on new material, but soon finds herself under attack from a mysterious dark presence. 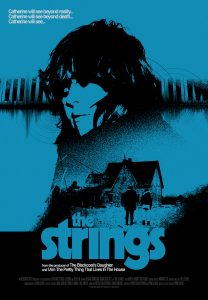 It’s a challenging feat to be alone on screen for most of a film’s runtime without losing the audience’s attention. Star Teagan Johnston carries this off effortlessly in director Ryan Glover’s achingly haunted horror The Strings, which was co-written by Glover and Krista Dzialoszynski.

The film establishes a chilly, moody tone from the get-go, watching from a distance as an unknown man wades slowly into the ocean, his arms held cruciform, drowning himself. It then introduces us to Catherine (Johnston), a singer recovering from a messy breakup that seemingly resulted in the collapse of her band. Catharine is spending the winter alone in her aunt’s beach house on Prince Edward Island in Canada in the hopes of writing some new music, leaving the house only occasionally to perform in near-empty venues, speaking to almost no one except friend Anita (April Aliermo) over Zoom and an agent and journalist we never see.

The one exception to Catharine’s self-imposed isolation is her budding romance with Grace (Jenna Schaefer), a local photographer helping her shoot the cover for her upcoming album. Catharine is clearly still haunted by the unseen partner she’s left behind, but Grace seems to be helping her patch that hole in her heart. That is, until they travel to a local haunted house to take some pictures, and something sinister seems to follow Catharine home.

The Strings is a quiet little movie that is big on atmosphere even if it is light on actual scares. Glover successfully establishes a feeling of isolation only to masterfully strip that away, leaving us with the distinct impression that something is watching Catharine, even when the shadowy entity isn’t in sight. He also knows how to use empty space to make the eye scan the frame restlessly, certain that something must be lurking just over Catharine’s shoulder. The creepy moments are familiar but effective, gradually building up to a shocking finale that perfectly complements the film’s stark, sparse vibe. 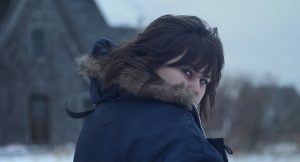 Before we can get there though, we have to spend a lot of time hanging out with Catharine while she works on her music, and not a moment of it feels dull. This is Johnston’s movie through and through, and she gives a beautifully raw performance that is hard not to sink into. It helps that Johnston is a musician first and foremost, because the creative process she portrays feels realistic and the music she performs is lovely and hypnotic. We’re watching someone work through their demons and channel them into art in real time, and anyone who’s gone through that process will instantly relate.

A modest but powerful film, The Strings hits all the right notes and offers a refreshingly organic queer relationship and unconventional lead. More unsettling than it is genuinely frightening, it doesn’t seem particularly interested in giving many answers, which is sure to leave some viewers unsatisfied. But for those who enjoy a good slow-burn, put this one on to simmer and let it wrap you in its icy layers.