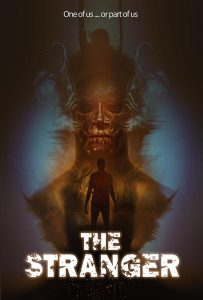 The Stranger is a unique and compelling independent horror film that owes as much to 80’s action movies as it does its direct influence of the ’80s slasher flicks. The debut feature of directing team Mike Clarke and Paul Gerrard is part family drama, part horror, part thriller, even part creature feature, and in a few years, we could well be looking back on this film as the starting point for a number of hugely successful film careers.

Revolving around a house robbery gone wrong, The Stranger tells the story of a small family unit consisting of mum Amanda (Jennifer K Preston) and her daughter Karli (Isabella Percival) who, grieving over the death of their patriarch, move to an isolated bed and breakfast deep in the British countryside. Into their new life comes a mysterious-yet-enigmatic stranger named Kyle (Damien Ashley) who initially asks to stay the night, but it becomes apparent quite quickly that he isn’t what he seems. As the days go by Kyle becomes more reluctant to leave, with Amanda and Karli growing increasingly concerned about their safety and Kyle’s bizarre behaviour. Even when the film slows down during its calmer second act, the dynamic between the three main actors is always intriguing. A deceitful and heartless liar, Kyle is not a hero, but his driving need to save his own skin at any cost, and by using any means necessary gives the film an urgency that makes for an interesting protagonist and leaves us all feeling like guilty collaborators.

Harking back to both the golden age of the video nasty and the 90’s independent film boom, Clarke and Gerrard manage to find some interesting tropes and original concepts in a well-worn genre. They are also clever enough to leave the antagonists somewhat unexplained, allowing the audience to come up with their own theories and conclusions. The lusciously lit cinematography gives the dark internal spaces an ominous sense of foreboding, which, much like its main characters, leaves the audience feeling helpless and trapped. External shots in mist-filled woods are a nod to the folk horror genre, but they do give out an ambience and imagery that stays with you. Clarke and Gerrard also deserve praise for producing a couple of eerie moments that are imagined to the nth degree, while the quick and sharp editing makes the already brisk 79-minute run time fly by.

The opening scenes are very stylish but it’s in its final act that The Stranger exceeds its limited budget and our expectations. As the tension and excitement are ramped up relentlessly, the film generates a kind of manic exhilaration and, as the end credits roll, you only just remember to exhale.