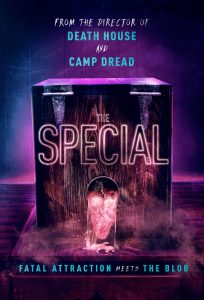 Synopsis:
To console his friend Jerry (Davy Raphaely) who believes his wife Lisa (Sarah French) has cheated on, Mike (Dave Sheridan) takes him to a brothel and orders him “The Special”—unwittingly throwing him down a nightmarish rabbit hole of twisted addiction.

The Special is one of those movies that faces an uphill climb to get viewers invested. For starters, its premise revolves around a man repeatedly inserting his penis into a wooden box, which sounds more like the opening of a song by The Lonely Island than a serious horror movie about addition. Its central character is also reprehensible from the outset, only getting more unsympathetic as the film goes on, making it very hard to care what happens to him beyond hoping he meets a sticky end. But stay with it, because before you know it, this gross little offering from director B. Harrison Smith and writers James Newman and Mark Steensland will suck you in, leaving you eagerly anticipating the climax.

The film plays out as a cautionary tale about the dangers of addiction. Jerry’s friend Mike warns him that getting “The Special”—a sexual act involving the previously mentioned wooden box—should be a one-and-done thing, but Jerry can’t stop at just one visit, going out of his way and even committing criminal acts just to get his fix. Fittingly, the initial conversation that leads them to the brothel takes place in a bar, and it seems clear that if Jerry had spent more time at home and less time out drinking with Mike, the distance between him and Lisa might never have formed. As his addiction deepens, their relationship further deteriorates, along with Jerry’s physical appearance. Before long, he’s a hopeless junkie, scratching at his blistering skin, hurting those around him, consumed entirely with his selfish desires.

And they are selfish. Jerry cares solely about his own sexual gratification, neglecting his loving wife and instead choosing to get his rocks off alone in a seedy motel. When he does have to spend a night at home, he attempts to incorporate his new obsession into their sex life without Lisa’s consent, oblivious to (or, more accurately, completely unconcerned about) the harm the unknown element might—and does—do to her. When she later tells him that she’s gone through one of the most heartbreaking experiences that a woman can face, he barely blinks an eye.

While Jerry’s obsession is clearly an addiction, it also masks a much darker problem, one that surely existed just beneath the surface even before he visited the brothel: he’s a misogynist. The box is a stand-in for his dream partner not only because it gives him pleasure, but because that’s all it does. It can’t talk. It won’t ask where he’s been after a long night of boozing. It’s an object to be used—and that’s clearly how he’s always viewed women. Now that he has what he’s always wanted, he begins treating the woman around him this way, whatever thin veneer of charm or civility he’d shown before now stripped away, revealing an ugly truth.

These themes aren’t exactly subtle, but The Special isn’t exactly going for subtlety (again, it’s a movie about a man repeatedly putting his dick in a box). It’s nasty yet compelling, cleverly building intrigue about what’s in the box while making you first chuckle then squirm each time Jerry takes his new toy out for a ride. Raphaely gives the role his all despite the awkward subject matter, and while some of the other performances are a little rocky, there are a few memorable characters scattered throughout, including Doug Henderson’s imposing turn as the brothel’s bouncer Ivan.

An ill-fitting score frequently undermines the mood, but it’s not so distracting as to make the film unwatchable—which is good, because the final act more than justifies your investment. Boasting some impressive practical effects, it’s a predictable ending, but highly satisfying nonetheless, giving a whole new meaning to the term “happy ending.”

Unique, daring, and more than a little disgusting, The Special doesn’t entirely succeed in what it’s trying to do, but it’s a film you’ll want to tell your friends about as soon as you’ve seen it. If nothing else, hopefully it’ll make you think twice before putting your genitals where they don’t belong.