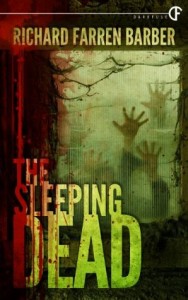 The Sleeping Dead was unfortunately a novella I just couldn’t get into, it’s one of those books that tells a story as it happens, much in the same way as a soap opera and that for me shoves character depth flailing out the window.

The story is told through the eyes of Jackson Smith who goes for a job interview just as everyone is turning or about to turn into either a suicidal maniac or just sit down and become one of the sleeping dead. He eventually hooks up with a secretary from the office block and between them they manage to focus and ignore the voices in their heads telling them to end it all, pushing and pushing them.

Pretty soon it seems everyone’s dead and that’s the end of it, the main characters are not relatable people in any shape or form, they don’t come with any history and as a result you just don’t care what happens to them either way. It was the perfect way to distance the reader from the characters which was a shame and coupled with some cringing metaphors, I guess this wasn’t one for me.