The Shining Gets a Chicken-Tastic Makeover with The Chickening 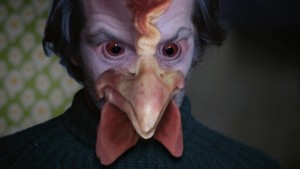 One of the scariest films of all time has been transformed into a poultry-infused, surreal explosion of absolute madness and we love it. If anything, The Chickening may be more terrifying than the original film. The isolated hotel has been swapped for Charbay’s Chicken World, Danny is now a dyslexic bearded New Yorker and Tony is a literal character on the end of his finger. Wendy’s eyes are rolling all over the shop and Jack is slowly changing in to a chicken.

It’s probably one of the most mental things we’ve ever feasted our eyes on and we don’t know whether to watch it again or bury it somewhere so that no-one can find it. What is certain is that the attention to detail and the editing prowess in this short video is astounding. It’s an unnerving, hilarious and, quite frankly, disturbing 5 minutes and we challenge you to watch it without having “Come Play With Us, Danny” stuck in your head for days after.

The Chickening recently screened at Sundance Film Festival and comes from Nick DenBoer and Davy Force. We hope we aren’t the only ones who are craving a feature-length version of this mad bit of film-making. Check it out below!