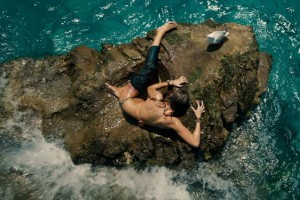 As film monsters, sharks have of late, become rather more favoured by films best avoided. I’m talking of course, about the charm-free, deliberately bad CGI shitfests regularly screened by the SyFy Channel, which have succeeded in making movie sharks decidedly unscary. Hoping to bring toothy terror back to the water is The Shallows, drifting towards a June release in the US.

The suspense thriller is directed by Jaume Collet-Serra, who helmed 2005’s rather enjoyable House of Wax and 2009’s The Orphan, as well as Liam Neeson actioners Unknown and Non-Stop. It is written by Anthony Jaswinski, known for horror thrillers Vanishing on 7th Street, Kristy and the upcoming Satanic.

The official synopsis from Sony Pictures reads: In the taut thriller The Shallows, Nancy is surfing alone on a secluded beach when she is attacked by a great white shark and stranded just a short distance from shore. Though she is only 200 yards from her survival, getting there proves the ultimate contest of wills.

Blake Lively (The Town, Savages) leads the cast as Nancy (or, confusingly, Mia, according to IMDb), and is joined by Óscar Jaenada (The Losers) and newcomer Sedona Legge.

The Shallows is set for US release on June 24th. If it lives up to the promise of this quietly ominous trailer, we could be in for a terrifying treat.