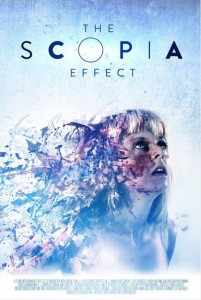 Synopsis:
When a young woman who is suffering from depression tries hypnosis, she opens a part of her brain that should not be accessed. She goes too far back in to her memories and accesses her previous lives. Her distant past starts to infect the present in a horrifying fashion, and Basia finds herself struggling to differentiate between what is real and what is not.

The Scopia Effect is immediately set up with a dreamy tone and this is carefully carried throughout its entirety. It has it’s foot firmly in horror, but it is clear that writer-director Christopher Butler did not want to limit this film to just the one genre. There are elements of hard-hitting drama I would argue, that you’re going to know whether you’re going to love or loathe this instantly. In the first scene, we are greeted with a sleeping naked woman, embraced by a beautiful blur of colour, lights and harmonious sounds and sense of vulnerability is immediately conjured. There is an unavoidable amount of weakness present in all of us and as humans, it is something we can’t escape. This is an idea that is explored with a high level of intricacy in The Scopia Effect; Basia is helpless to defend herself from her hauntings as what is happening is beyond rationality. Through hypnosis, she has managed to access a part of her mind that holds the details of her past lives and in doing so, has unleashed something that cannot be controlled or explained; hence the title The Scopia Effect. This triggers her descent in to madness, as her brain struggles to come to terms with what is happening. Is she hallucinating, simply crazy or is this real? The film’s otherworldly exterior is reminiscent of Jaco Van Dormael’s Mr Nobody and does well at reflecting its themes of reincarnation; where the possibilities of the past can go beyond our imagination. It manages to flow fluently and credibly between different periods of time like Darren Aronofsky’s The Fountain, and features the same level of commitment and belief in its extraordinary story. Despite these similarities to other films, The Scopia Effect successfully manages to carve its own identity and it never feels like a copy or imitation of another film. It is entirely unique, mesmerising and wholly unforgettable.

Many recent films have been commenting on the dangers of artificial intelligence, fears of technology and the future of the human race. However The Scopia Effect takes a very different approach as it presents the dangers of the past. In a similar manner to stories like Frankenstein and recent films like Ex Machina, it warns about the consequences of playing god, if only by accident. There are elements of existence that we will not understand and it is in our best interest to leave some things unanswered. There is a heart-breaking story of grief at this film’s centre, which shows the result of death haunting you internally and eternally. Many of us will understand the hurt that comes with losing someone you love, so The Scopia Effect’s story is easy to relate to. The beautiful scenes and cinematography work wonderfully to prevent the film from being too bleak. In times of depression and loneliness it is easy to ignore the beauty that surrounds us every day and The Scopia Effect embraces this necessity. The film steers away from being too bleak, but deep down the story is as haunting and tragic as Mike Flanagan’s Absentia, something with true horror at its core. Its decision to contrast its sombre interior with a gorgeous exterior, gives the film a magical, fairytale-like feel that prevents it from being overly depressing. This feeling is furthered with its serene music score which gives it a gentle, mellow atmosphere, which works in favour of the frights which then appear all the more formidable.

Joanna Ignaczewska, who plays Basia, carries the film with a committed and powerful performance. Basia’s mother died when she was a child and she has been struggling to come to terms with it ever since. Ignaczewska’s portrayal of this young woman in pain is heartfelt and truly moving. With an effortless amount of dedication she puts her entire self in to the film and it shows. She begins the film with a believable sense of childish naivety and subtle close-ups on her eyes and twiddling fingers show that there is a certain amount of pain present within her. As the film continues the pain increases and with it, her performance strengthen and becomes even more natural as she truly becomes her character. Her character is wonderfully written by director Chris Butler, who manages to create a likeable, humane character. The horrors that fall up on her are desperately tragic, because she is just a normal girl who is trying to go about her life in the best possible way. As an audience, we are drawn to her and are embraced by her story. We, too, travel along her painful path and witness the terrors as she does. The film is immersive and relentless and it becomes impossible to escape from it’s stunning clutches.

I could discuss and rant about this film for hours, but I fear I have gone on too long. All in all, it’s a quietly disturbing and devastating story that deserves to be seen. It is a true delight to watch, because it is visually gorgeous and unlike anything you’ve ever seen. The concept has such depth, beauty and creativity, it’s near impossible not to be completely consumed by it. With a combination of great lead performance and perfect direction, The Scopia Effect is a marvel.