The Ring meets The Grudge in Upcoming Sadako vs. Kayako 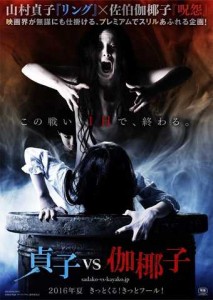 The two widest known fictional Japanese spirits are set to do battle in Sadako vs. Kayako and you can check out the brief teaser trailer below.

The idea of a Ju-On and Ring mash-up began earlier this year when a fan-made trailer emerged online; however it was just an April Fools prank. This one, however, is no joke. The two respective studios must have realised the potential around this idea, and here we are now with Sadako vs. Kayako.

There’s no exact plot details as of yet, so we can let our imaginations run wild at the possibilities. From the teaser, it looks as though Kayako is emerging from Sadako’s well and the Ring tape is playing at Kayako’s house. So, can we assume that Kayako herself played the tape?

Kōji Shiraishi (Grotesque) is directing Sadako vs. Kayako, which will be released in fabulous 4D next year in Japan, hopefully it will hit the UK and USA soon after.