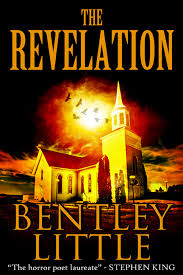 One of the greatest gifts to the horror community in 2014 was the announcement from Cemetery Dance Publications that they were going to re-release 12 of Bentley Little’s long out-of-print books in collectible limited edition format as well as affordable trade paperbacks and ebook versions.

Their first offering is Little’s The Revelation which won him the Bram Stoker Award for Best First Novel in 1990 and of which has virtually been out of print since then, leaving horror fans scrounging used book stores and ebay auctions to score a copy.

The Revelation is the story of Randall, Arizona in which simple, small town Western America life quickly goes afoul when unexplainable things start happening. An eighty year old senile woman gives birth to a fetus that walks off. A minister and his family disappear. Obscenities are scrawled in blood on the walls of churches. Animals and farmers are found slaughtered.

The violence and horror mounts, the death toll rises, and when it seems it’s time to give up, the local sheriff, a minister and a Pepsi delivery man team up with a traveling bible quoting preacher, Brother Elias, in an all out war with the ancient evil that has fallen on Randall, Arizona.

In an era when paperback horror novels featuring exorcisms, evil preachers and Satanic babies were being put on supermarket racks weekly, Little was able to market on this trend with his genuine voice that created a legion of fans. A voice that mixed traditional horror with B-movie gore, fast paced tension with remarkable character development.

Whether your journey started in 1989 with the original printing or if this will be your first time, you won’t be able to argue why the man made a name for himself with The Revelation. Little goes hand in hand with King, Koontz and McCammon, a true master of the genre getting a well deserved rebirth nearly 30 years later.