The Returned Will Depart As Bates Motel Continues 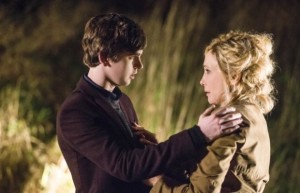 For all you Bates Motel fans we have some good news regarding the future, as A&E will be resurrecting Bates Motel with two more seasons. However, those of you who also enjoy A&E’s The Returned will be disappointed to learn that the show is being cancelled.

The Returned was an American adaptation of the well-known and Emmy-winning French thriller series, and had the same premise, but clearly the execution just wasn’t good enough to beat the original, so they decided to end the show.

On the good side, Bates Motel will be returning for a fourth and fifth season, with both the 10-episode seasons airing in 2016. Bates Motel stars Freddie Highmore as Norman Bates living with his mother Norma Bates played by Vera Farmiga during his teenage years. The show is set before the events of Alfred Hitchcocks’ Psycho, and shows the inevitable demise of Norman and his spiral into insanity.

Rob Sharenow, executive vice president of A&E said: “The vision of our incredible creative team has exposed the steady breakdown of the relationship between Norman and Norma Bates. We are thrilled to bring fans two more season to witness the next stages of Norman’s transformation into the most notorious psychopath in cinematic history.”