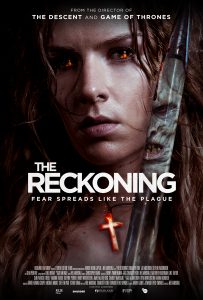 Something wicked this way comes in the trailer for The Reckoning, the latest horror film from director Neill Marshall (Dog Soldiers, The Descent).

In the film, Grace Haverstock, a young widow haunted by the recent suicide of her husband, is unjustly accused of being a witch and placed in the custody of England’s most ruthless witch-hunter, Judge Moorcroft. Forced to endure physical and emotional torture while steadfastly maintaining her innocence, Grace must face her own inner demons as the Devil himself starts to work his way into her mind.

The Reckoning releases in theatres, On Demand, and Digital on February 5th. Confess your sins and check out the trailer below.