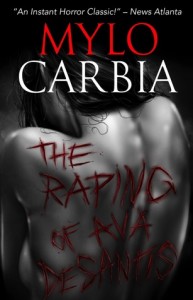 The Raping of Ava DeSantis by Mylo Carbia is a knockout ‘I Spit on your Grave’ style revenge horror that is perfectly paced and practically impossible to put down.

The story then goes back to its origin and 1991 where 18 year old Ava DeSantis, a grungy looking plain girl, ignored by most, catches the eye of three privileged rich boy’s. The good looking nice guy wants to pay Ava to help him with his studies, the details to be ironed out at a party. The three friends invite Ava back to their upper class dwelling, plenty of booze, drugs and a sickeningly violet rape scene.

The characters are scrupulously laid out, the rich nice guy that doesn’t remember a thing, wasn’t mentally taking part, was kinda forced into it, yeah fucking right. The brash annoying jock that takes everything for granted, a cut above the rest and finally the nobody, he’s there to make up the numbers and provide a particularly gruesome ending.

The Rape scene is not overplayed, there’s enough there to grasp what’s happening and who does what, in fact it’s very well described. Morning comes and it finally dawns on these animals exactly what they’ve done, first thought, how the fuck do we get out of this.

“We’ll clean her up. Alcohol, peroxide, we’ll fix her up best we can. They won’t be able to find a damn thing on her body.”
“And what about the inside?” Sebastian looked at the others with deep concern.
After a loud sniffle, David finally spoke up. “My Momma left her turkey baster here at Thanksgiving.”

The immediate emphasis going on the tragic after affects and the power plays that people with money take for granted. The rapists don’t get what they deserve, not yet anyway, for now they get away scot-free and Ava DeSantis. She gets one million dollars, half now and half in fifteen years, and the gift of giving birth, cruelly taken from her.

Forward fifteen years and its gametime but this isn’t a quick kill all and disappear type of revenge. This is a slow seeping suspenseful vengeance that dips into horror and eroticism. Dwelt on for years till madness threatens and not restricted to the three culprits. She inserts herself into the life of her chief assailant with calculated and fearless audacity, confusing his feelings, while at the same time getting friendly with nice rich guys pregnant wife.

Meticulously planned by a beautiful and dangerous woman, an enthralling revenge trip that goes just where you want it to go with a horrific end and a brilliant twist. My favourite part of which there were many, was Mr nobody with the turkey baster idea. David gets his comeuppance in spectacular fashion, a play that’s worth the admission price alone.

The Raping of Ava DeSantis by Mylo Carbia is a disturbingly perfect horror story, one of the best I’ve read this year. Simple, yet powerfully told, the writing is unabashedly paced with riveting characters and a completely gripping story. This certainly deserves to be filmed and I look forward to reading more from Mylo Carbia.