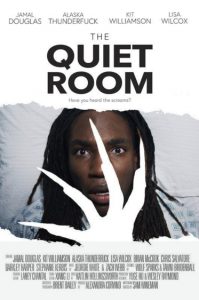 Synopsis:
After attempting suicide Michael awakes a psych ward demon and it’s only a matter of time before he must stop her before she kills everyone around him.

To put it bluntly, Sam Wineman’s creepy short The Quiet Room is nothing short of brilliance. Exploring mental illness whilst suffocating his audience with terrifying waves of dread, Wineman works hard to tell a story in 27 minutes that other filmmakers would struggle to do in 90. He establishes his own legend to delivers a film which graciously celebrates everything about the horror genre that I love. However, The Quiet Room also gives me something else which has been missing from the genre… adequate queer representation!

In the film, Jamal Douglas plays a young gay man who is struggling to cope with his own depression. After being admitted into a psychiatric wing of a hospital he wakes up Hattie, a dark and menacing demon played by the extraordinary Alaska Thunderfuck of Drag Race fame. As his own condition begins to deteriorate Michael is offered help but Hattie doesn’t want that to happen and she isn’t afraid to spill a little blood in the process. What follows next becomes a tense viewing experience packed with everything you’d ever need to send icy shivers down your spine.

On the surface, The Quiet Room is a solid little chiller that I would love to see developed into a feature some day. Afterall, as director, Wineman has proven that he knows just what it takes to scare audiences and it’s great to know that he isn’t afraid to pummel its audience into submission thanks to some incredible make-up effects and its haunting visuals. Also, to its benefit, The Quiet Room boasts a fully talented cast who manage the demand of its sensitive subject matter and to make its strong moments of terror believable.

Speaking of which, in the lead role Jamal Douglas is fantastic. As Michael, he delivers every emotional beat of there character with gusto and his performance feels completely natural. Meanwhile, starring opposite him, Lisa Wilcox (known most to genre fans as Alice in A Nightmare on Elm Street 4 and 5) plays Amy, a nurse at the hospital. Together, they quickly form a strong bond. Meanwhile, as the protagonist Alaska Thunderfuck’s performance (real name Justin Andrew Honard) is superb as Hattie! Her performance is even more terrifying than I had hoped far and fans of horror and Drag Race will be more than satisfied with her efforts here. 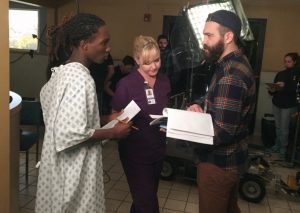 Overall, thanks to some incredibly unnerving visuals that will make even the most hardened viewer feel unsteady, The Quiet Room looks simply stunning on screen and is one the most terrifying shorts I’ve seen in a very long time. The all-inclusive cast work incredibly hard to make their characters feel authentic. Under that, The Quiet Room isn’t just a much-needed addition to queer cinema but it also addresses the need for diversity within the genre too which makes Sam Wineman a future filmmaker to keep an eye on.

It is for these reasons that The Quiet Room truly deserves to be seen!