The Quiet Hour Gets Other-Worldly Cover Art in the UK 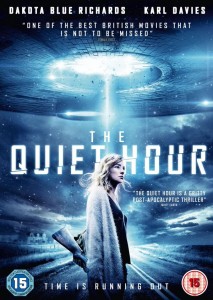 First-time director Stephanie Joalland is making an ambitious debut with the science-fiction thriller The Quiet Hour, which was released on DVD in the UK on 7th September 2015. You can check out the DVD cover art below, which is beautiful and places our leading lady Sarah (Dakota Blue Richards) in the forefront. Like many alien-invasion horror-thrillers, the cover art is drowned in tones of blue; a simple and effective colour that connotes other-worldliness.

You can watch the trailer below which shows a bleak post-apocalyptical world where humans must adjust their lives after an alien attack. Focusing on a young woman, the trailer proves that aliens are not the only enemies and people will do all they can to survive, too.

Synopsis:
In the aftermath of an alien invasion, a feisty teenage girl sets out to protect her farm from human scavengers who will stop at nothing in order to survive in a post-apocalyptic world.

There has been a lot of positive buzz surrounding The Quiet Hour, so be sure to support British horror and get your hands on the DVD. Or else!