If you haven’t managed to catch The Purge season 1 on Amazon Prime yet, then you’ll be glad to know that the series will be released on DVD and Blu-ray on 8th January 2019.

This news comes soon after The Purge was renewed for a second season. When speaking about the renewal, Chris McCumber, president of entertainment networks for NBCUniversal said:
“USA Network is so proud to be the television home for the iconic franchise. The partnership and creative trust of Jason Blum and everyone at Blumhouse Television and Universal Pictures ensured ‘The Purge’s’ successful transition from film to TV – and, along with Universal Cable Productions, we look forward to digging even deeper into the mythology in Season 2.”

The first season followed the events before the Purge and on Purge night, so we’re expecting more of the same with a season 2. 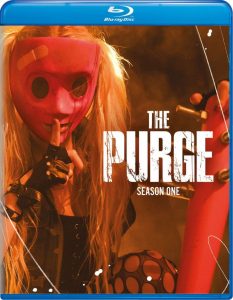 The special features on Season 1’s home release are as follows:
Take What’s Yours
The Giving Time is Here
I Will Participate
A Conversation with Cast & Crew
Anatomy of a Scene
Costumes & Props
Table Read

Look out for the release next year.