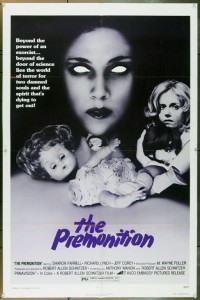 After starting out as a straightforward drama entitled The Adoption, Director Robert Allen Schnitzer and writer Anthony Mohan plaited metaphysical elements and re-wrote the script as a supernatural thriller with added fantasy/ nightmare sequences. The title was changed to Turtle Heaven and later renamed The Premonition, but the new paranormal facets mended awkwardly with the script’s dramatic origins. As a result, The Premonition dithers through a shoddy production and patchwork plotting before weltering on the big screen like an elongated yawn. Scare components feel clumsily jimmied and are rarely tense or compelling, while its drama is mishandled due to defective direction, paltry writing and mostly mediocre performances. The editing then hews what’s left into a hackneyed, rambling mess.

Andrea’s psychotic breakdown and Sheri’s surreal premonitions seem preposterous within the story of a mentally unstable mother who plans to abduct the baby she was forced to give up. Some horror moments trigger a slither of dread due to a couple of extreme “staring directly at the camera in a scary way” shock cuts that Sheri sees in her visions. These immediate close ups are usually accompanied by violent bursts of music that are sudden enough to startle and more commendable than most modern boo jumps, but do nothing to rescue The Premonition from total, cataclysmic despair. The horror also feels ill-fitted, along with inexplicable character switches and fanciful plot twists. 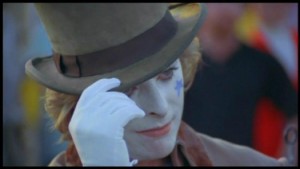 The character of Janie (the adopted daughter) doesn’t feature as much as she should, where greater involvement might have injected some much needed empathy/ emotional heft. Instead we are cajoled into a subplot that follows her adoptive father Professor Miles Bennett. Miles trails his colleague Dr Jeena Kingsly’s research into telekinesis and dream therapy, coincidentally just prior to his wife’s perplexing visions. Miles seems intrigued but sceptical of Jeena’s theories until Sheri has her hallucinatory meltdown. The pair sprout jargon as though reading from a manual, relaying in a manner suggesting much research has occurred, while greater effort should have gone into crafting a more succinct narrative and developing the characters. Miles and Jeena flirt in early scenes but this latent subplot is side-lined and the story segues into an inappropriately Pyhtonesque finale featuring a clown, a piano and a horse (which is not as fun as it sounds).

Andrea snaps after a failed attempt to kidnap her daughter. Following this she maddens some more and becomes surprisingly superfluous. Even though, as a protagonist, Andrea is insipid, despite being adequately performed, her swift shelving from the story remains rather baffling. The second half focuses more on Sheri and her grandiloquent visions while Jude (Richard Lynch from Dream Demon, Trancers 2 and Alligator 2: The Mutation) gets thrusted into the foreground, hamming it up nicely as the perverse, conspiring clown. Jude also has a latter-half turn which is never fully explained, while another plot twist totally bemuses and The Premonition ends as a massively bungled, befuddling venture that could have worked better as a straight-forward drama. 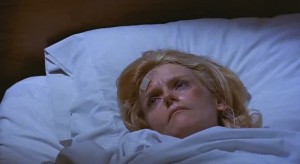 In an interview on the Blu-ray extras, Director Schnitzer states that he wanted the violence to be implied in the “Greek tradition”, more suggested than exposed, but a bit of screen vehemence may have gone some way to alleviating the brain-aching  tedium. This is definitely the worst film in Arrow’s American Horror Project box-set but the extras are decent. This final disc includes: “Pictures from a premonition” – a making of documentary featuring interviews with director Robert Allen Schnitzer, composer Henry Mollicone and cinematographer Victor Milt, a separate archive interview with Schnitzer and his short films Terminal Point, Vernal Equinox and A Rumbling in the Land. Also included are peace spots, a theatrical trailer, TV spots and an audio commentary.