The Poster for The Forest Offers a Sinister Way Out 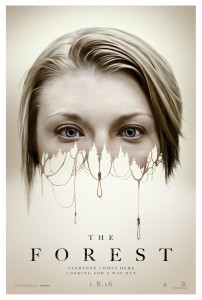 Natalie Dormer is the face of the poster for the upcoming supernatural horror The Forest. The poster’s design is simple and effective as it shows the blending of three important elements of the film; the forest, the main character and nooses, apparently.

Synopsis:
A supernatural thriller set in the legendary Aokigahara Forest at the base of Mt. Fuji in Japan. A young American woman, Sara (Natalie Dormer), goes in search of her twin sister, who has mysteriously disappeared. Despite everyone’s warnings to “stay on the path,” Sara enters the forest determined to discover the truth about her sister’s fate – only to be confronted by the angry and tormented souls of the dead that prey on anyone who wanders into the forest.

The film is set in the infamous suicide forest in Japan, where thousands of people have gone to commit suicide. You can check out the trailer also below, and delve even more in to the mysteries. The repetition of “stay on the path” is sort of hilarious, but they do have a point. Venturing off the path causes Sara nothing but pain and there is no amount of money that would convince me to stay in that forest at night, alone. The film looks very spooky, indeed.