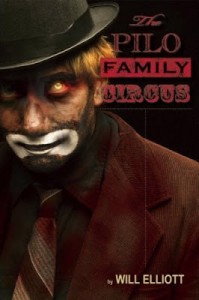 Now the Pilo Family Circus isn’t your usual slapstick circus affair and you don’t find it intentionally, whether you’re looking or not. And trust me when I say you really don’t want to visit this place, every act has a purpose and entertainment isn’t first in their list of priorities.

Jamie, driving home from work late one night, almost runs down a pedestrian. No ordinary passerby this guy’s dressed in clown getup right down to the white face and fake red nose. What he remembers most was the absolute look of total bewilderment on the clowns face.

From this moment on, Jamie’s life changes to the surreal, clowns plague his nightmares, someone’s messing with him and pretty soon he’s got an audition, he’s been chosen for a role not of or even in this world. A life or death audition to be a clown of the Pilo Family Circus.

Here we meet Gonko, the clown’s boss and quite possibly one of the best supporting characters ever to grace the pages of a horror novel. Prone to the odd violent outburst, irrational humour and completely mesmerizing page time.

‘Gonko prowls around the car park, somehow able to walk with an assassin’s stealth despite his ridiculous large red shoes. His face seems split into vicious creases and hard as stone; it is a face that looks to have been used as sandpaper and soaked in whisky.’ And he owns a pair of typically baggy clown’s pants that deliver objects of desire or desperate need to his pockets, usually a weapon such as a knife, axe or even bigger knife.

Jamie soon finds himself split in two, personalities that is, one his old normal self, looking for a way out of this hellhole and the other, a crazed clown that hunts trouble with not a thought for the dangers that lie all around him.

The saying ‘right next door to hell’ wouldn’t be too far amiss in describing the whereabouts of the Pilo Family Circus and good intentions is the last thing in the minds of the various lures that occupy this place of tricks. A thoroughly entertaining, violent tale that shows a wonderfully warped imagination that you can’t help being dragged in by and if you’re looking for something slightly different, the Pilo Family Circus is well worth finding.