THE PERILS AND DANGERS OF THIS NIGHT: Book Review 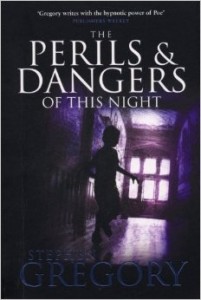 The Perils and Dangers of this Night by Stephen Gregory is set in the perfectly creepy atmosphere of Foxwood Manor in 1966, a boy’s private school in the woodlands of Dorset. It’s Christmas holiday time the school is empty, all except the headmaster and his wheelchair bound wife, and one 12 year old boy, abandoned by his mother for the festive period.

Alan Scott is resigned to spending his Christmas with the Kemps, the stuffy headmaster is the perfect symbol of an old fashioned English private school, annoying and infuriating in large doses. His wife struggling to contain a man whose insufferable attitude is deserving of a slap more than most and you will be hoping he get what’s coming to him.

Out of the blue ex-pupil Martin Pryce arrives with girlfriend Sophie in a new but crash damaged E-type Jag, Pryce appears a trifle unbalanced yet resolute, with an agenda that permeates slowly through the cold halls of the school as the snow falls, making it impossible for anyone to leave. This will be a Christmas that no-one will forget.

You won’t get a more perfect setting for a psychological horror story than Foxwood Manor, young Alan sleeps alone in his dormitory and if that doesn’t set things up, the entrance of Pryce and the foreboding terror that follows him puts the perfect ingredients into the mix. One minute likeable and normal, the next contrived and precipitating danger. The story is told, nightmares and all, through the eyes of the young chorister as terror descends.

‘It was me, it was my reflection. But it wasn’t me, it was a boy I didn’t know. And when I turned he’d gone. There was no one, only the black mouth of the corridor and the wintry breath it exhaled’.

With not only the ghosts of the place turning the tension up, there’s the young man, the ex-pupil who has a story to tell, shocking revelations about the school and what happened there. But in what form does abuse take? Maybe not what you expect and who is really the victim.

‘Someone was in the woods with me, unseen, unheard, coming closer and closer, so that I froze and held my breath and stared around and listened as hard as I could for a footfall or a whispered breath – somebody coming, closer and closer…’

An enjoyable psychological horror in an ideal setting, with an atmosphere that the author takes full advantage of, I did guess some of the outcome regarding the car and its purpose but it could have gone several ways and the collapse of a troubled mind was irregular and erratic, never fully becoming.

Stephen Gregory writes with an absorbing style, the reoccurring theme in his books is that of an uncomfortable relationship between a wild bird and a human intermediary, with other titles like The Cormorant and The Woodwitch. This story tells of a Jackdaw rescued and cared for by the young pupil. Indeed, he continues this theme in his recent novel Plague Of Gulls, which is set in and around Caernarfon, in North Wales.