The Ending To You’re Next That Could Have Changed Everything 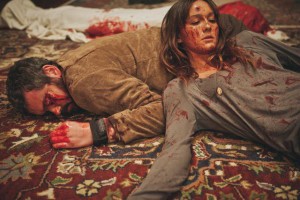 We’re often in the know about alternate endings or director’s cut endings either when we go to the cinema, or when we buy the feature on DVD, but the You’re Next original ending came to us through Twitter.

You’re Next lead actress Sharni Vinson and director Adam Wingard (The Guest, VHS), invaded our Twitter feeds with their discussion regarding the original, and far less badass ending to the bloody and unexpected home invasion film.

Spoiler alert! You may remember the ending we’re all familiar with, where the cop finally arrives to help end the domestic massacre, but unfortunately is struck down by a meticulous booby trap. Ending the film with hardcore and unforgiving heroine of the day, Erin, as she stands alone, the sole survivor after her boyfriend’s family we’re hunted down by one of their own.

The picture tweeted by Vinson and Wingard shows the female victor defeated rather than having just brutally defended herself, as she lies next to A.J. Bowen aka Crispian with a bullet in her head. Wingard said that originally the cop put her out of misery, but he decided to not edit that version in. We’re thankful he kept the macabre, yet awesome ending, as it can be a rarity for a female to end up being the surprise carnage champion.