THE NORTHMAN’S POSTER PREPARES FOR BATTLE

Robert Eggers, director of The Witch and The Lighthouse, is back this year with a new revenge epic called The Northman—and the poster is ready to do bloody battle. 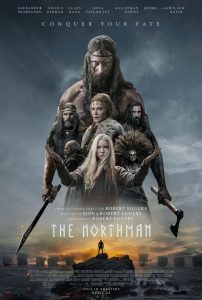 Alexander Skarsgard (True Blood), Anya Taylor-Joy (Last Night in Soho), Nicole Kidman (The Others), Claes Bang (Dracula), Ethan Hawke (Sinister), Willem Dafoe (Nightmare Alley), and Björk (Dancer in the Dark) star in The Northman. The film is described as “an action-filled epic that follows a young Viking prince on his quest to avenge his father’s murder.”

The Northman releases exclusively in theatres on April 22nd.