The Nightmare Comes To Blu-ray & DVD 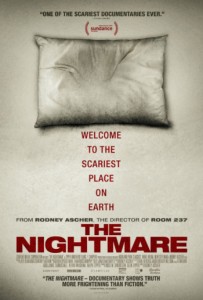 Step into the world of sleep paralysis with Rodney Ascher’s horrifically disturbing documentary about the sufferers of the condition and how it’s more terrifying than anyone could imagine.

The Nightmare has been taking the festival world by storm, particularly the Sundance Film Festival where Variety’s Justin Chang described the film as “a unique hybrid of documentary and horror-thriller… playful, visually inventive…Ascher has pulled off something uniquely impressive.”

Director Rodney Ascher, known for his documentary Room 237 about Stanley Kubrick’s The Shining, delivers this frightening truth through his own personal experience of sleep paralysis, therefore understands the absolute terror from it.

We won’t be getting any sleep after watching this (thinking about sleep paralysis can actually cause it!) as FilmRise are releasing The Nightmare on DVD and Blu-ray on August 4th 2015.

Synopsis:
Eight people from very different backgrounds explain what they’ve experienced when their sleep paralysis takes hold. All of them recall what they believe are hallucinations of “shadow people” that loom over them and grow increasingly aggressive the longer the paralysis lasts. A rational explanation becomes harder to find as the similarities become alarmingly real.