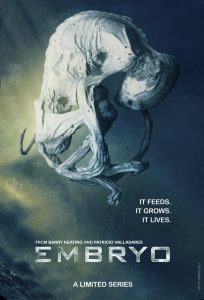 The first sales art has been released for Patricio Valladares’ (Downhill) sci-fi endeavour Embryo and it shows the birth of something frightening.

The film follows Kevin and his girlfriend Evelyn, who is abducted and impregnated by creatures from another world. While pregnant, Evelyn discovers that she has the craving for human flesh, so the pair decide to go on the run to try and fix what’s growing inside of her.

Embryo has been co-created and written by Barry Keating, reuniting the creators of 2016’s exciting thriller Downhill once again.